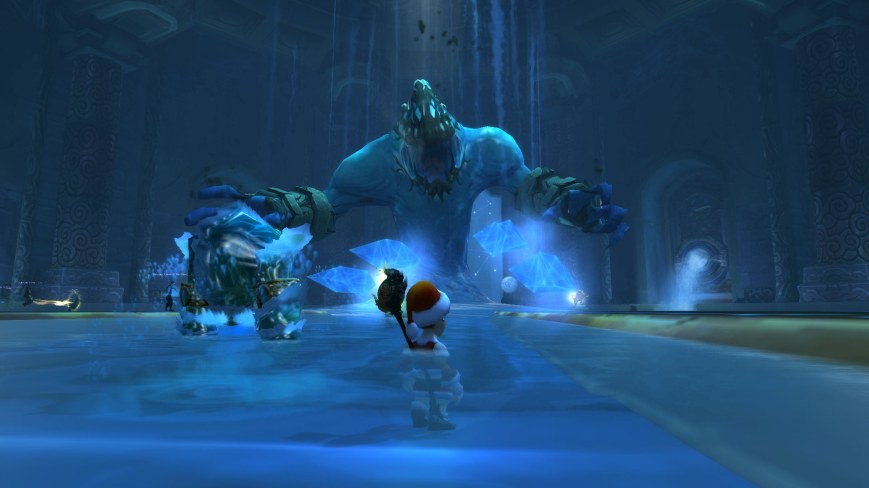 A couple of nights ago, Yotaan and I were playing together, me on my pally and him on his shaman (we were actually on the characters that are the namesake of our blog names).  We decided to sign up for a flex raid, with me listing my name because I was a healer.  I had expected to only get a few whispers, because my ilvl was not super high (ilvl 536).

A quick discussion later, and Yotaan and I decided to join the 25 man group.  I whispered the dude back, and we were quickly invited. Truthfully, I was astonished that he wanted my rather undergeared healer, but there were no questions asked about my capabilities.

After a few minutes waiting, we all flew there and started the raid!  Yotaan and his dps were faring quite well- my healing not so much.  Even pulling out all my stops, I was a distant 7th (we ran with 7 healers for some reason).  We tore through the trash, and quickly found our self at the boss.  After an accidental pull and subsequent wipe, we got all set up and pulled for reals.  My healing fared much better this time, but unfortunately both me and Yotaan ended up tanking the ground.  We wiped, kicked the AFKs, and attempted again. Again, Yotaan and I ended up tanking the ground, but the group managed to pull it off.  Loot was distributed, and we moved on.

Next up was the Protectors.  After a quick repairing/eating up time, we had pulled.  Once more, my heals were pretty bad, but Yotaan was at or above 5th place in dps!  We one-shotted this boss, and Yotaan won the roll on a ring!  Grats to him (alas, throughout the run, not a single holy pally piece dropped)!

We moved on to the Amalgamation of Pride.  At this point, the raid leader was asking us all to join his vent so that we could communicate.  Yotaan and I ducked our heads, as neither of us have vent installed.  Unfortunately, Yotaan was singled out (probably because of his high dps) to click the golden orbs in a specific fashion.  He got a brief run down, but I got the sense that the group just planned to tell him verbally when to go it.

We were in a pickle.  Neither of us had vent to communicate, we were brand new to this difficulty, and now Yotaan was being expected to complete a kind of complicated and entirely brand new mechanic.  So, we did what any sensible person would do.  We panicked and winged it.

The first attempt was quite painful. Because of the lower quality screen of Yotaan’s laptop, he struggled to see what was going on in the raid.  A few moments in, and he had died.  I, on the other hand, and been desperately trying to help him stay alive and wasn’t paying attention to my own heal.  So, then I died.  Shortly after, the entire group wiped.

The next attempt was better.  Yotaan made it in and out of the orb successfully, and I was able to keep myself alive.  However, we soon succumbed to the numerous adds, and the group wiped again.  It was getting rather late for me, so we decided to try once more.

Again, we wiped.  Yotaan and I said our good byes, and we quietly dropped group.

While it wasn’t the most successful of runs, I really enjoyed my first experience at 25man normal.  It wasn’t nearly as impossible as I had envisioned it, but was a refreshing challenge.  Yotaan on the other hand, really did not like it.  He felt ‘panicked, flustered, and tense’ the whole time.  He also said that he liked PvP way better (which is funny because I get really tense for PvP).

That was a fantastic growing experience for me.  I now really really want to raid on my mage (who is much better geared), and I found I loved the challenge! So, uh, if you ever need a dps, uh, give me a shout out! 😀

Addendum:  Keep sending in those Random Acts of Uberness!  We now have a page dedicated specifically to it!  Once we get some submissions, we will get a post up and running!