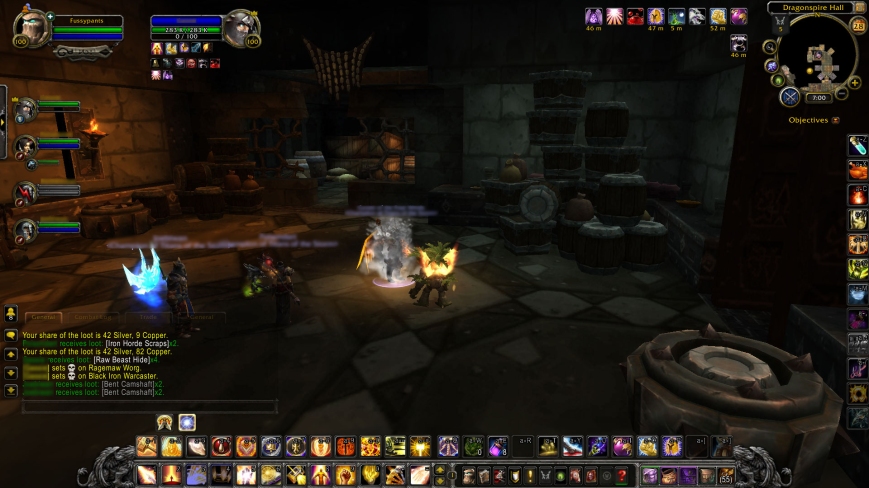 Healing dungeons with my guildies

You knew it was coming.  The inevitable.  The inescapable.  The healing article for Warlords.
Duh duh duhhh!

As  you probably already guessed, I’ve been doing a lot of healing recently.  Up until two days ago, I was the only healer in our guild at max level.  So I was healing just about every dungeon we ran. My gear is far from great due to my forever terrible loot drops, so for the majority of my healing I was around 600 ilvl.  And because of this, I have only healed normals.

My first reaction to healing, is that is hard.   A lot harder than it ever was in Pandaria, even in the beginning (I started healing in MoP, so I’m not sure how hard it was compared to earlier expansions).  There’s a lot more button mashing frantic spamming than I remembered. However, I noticed five big things with healing, that both made it harder and easier.

Number One: Less deaths
Maybe this was just me and I’ve mastered my pally this well, but there were a lot less deaths.  Near death accidents? Oh plenty.  But full on deaths? Not as common.  A combination of a decrease in spike damage and my Lay on Hands spell seems to help prevent the issue.  I have the time to react and throw out an appropriate heal.  Death isn’t as sudden and unavoidable as it once was. And this I really, really like.  I feel like I’m getting the chance to make a difference.  If someone screws up on mechanics, there is now a small window of time where I can save them.
I’m liking this less death thing.

Number Two: Less Spike Damage
I’ve definitely noticed this one; there is less spike damage.  No longer does the tank drop from 100% to 25% within a second.  Damage is steady and predicable.  But I’m not saying there is less damage, in fact I’d argue there’s more.  Damage is high but steady and sometimes heals alone cannot power through it.  There have been plenty of bosses where my heals simply could not spam through the damage and I have to pop some sort of cooldown.  My Gift of the Naaru has gotten quite a lot of use this past couple of weeks.  It takes more cooldown mastery instead of blink luck to keep people alive now.
I’m liking the less spike damage, but managing all my cooldowns can be stressful.  So I’d say this one’s in the middle for me. 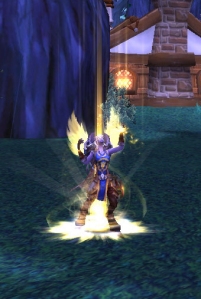 Number Three: Cooldowns are a lot more Powerful
In Mists, popping a healing cooldown on my paladin was a little boost to my healing but more meter padding.  I could feel a little increase in power, but not much.  Not now.  Now, when I pop my cooldown, its like I’m unleashing my inner angel of healing.  I grow larger, get freakin’ wings, and can heal like a beast.  For that brief space in time, nothing can kill my party members.  A couple of my AoEs and they are at full health.  Cooldowns are last resort, super charged moments of awesomeness.  And I absolutely love it!
But this is a double edged sword.  Sure, I have a button of awesomeness, but it has a three minute cooldown.  And I only have one button of awesomeness.  It’s really my last resort button because if I push it too early, we all can die later when I truly need it.
I have to say, I’m really digging this new powerful single cooldown thing!

Number Four: Mana Isn’t too big a Deal
I think I’ve only gone oom mid fight twice out of dozens of boss fights.  All my single target heals barely cost any mana.  Even when I spam Flash of Light on a tank, I don’t lose too much of that blue bar.  What really drains my mana is when I cast my AoE over and over again.  That’s when I go oom, and when everything falls to pieces.  This mana cost has effectively gotten rid of AoE mashing for a whole fight.  I will admit, it definitely took some getting used to after the AoE spamfest that was SoO.  But its admittedly more fun.  You gotta plan which heal to use instead of AoEing for all damage.  Sure, you still can AoE and it still will heal up everything but then you run out of mana.  And with spirit and mana regen spells gone, then you are kinda screwed.  You gotta know your spells and know your cooldowns.
I am really really liking this change!

Number Five: Some Fights are Very Movement Heavy
There are some fights that are extremely movement heavy.  As a  healer, I sometimes have to move constantly.  And with the decreased amount of instant casts, this is somewhat of a problem.  I often can’t stop to shoot off a heal, because if I do I’ll be dead or falling off something.  But if I don’t shoot off a heal, my party members will die.  It’s this wicked struggles, and I haven’t quite figured out the trick.  My fights with the most wipes are the ones with the most movement.  Ner’zhul and That Guy On The Train come to mind right away as some of my least favorite fights because of this.  Perhaps, as my gear improves and my one instant cast spell gets more powerful this will be less of a problem, but right now I’m struggling.
This change is not my favorite.

All in all, healing seems to have moved to become more cooldown and spell mastery than spirit stacking and AoEing.  And, even though its a lot harder I’m liking it more.  No, this is not me being elitist (I am far too lazy and goof off too much 😛 ) but me knowing what is best for me as a healer.  This new style of healing has kept me on my toes.  I’m relearning cooldowns and honing my reaction times.  I’m becoming a better healer and overcoming the difficulties.

Also as a side note, Proving Grounds Silver for heals, a total snooze-fest! I was able to two shot it (the first time failing due to a buggy mechanic) without busting out any cooldowns.  I will have to go back and try out gold, but that was super easy!  And a pretty bad preparation for dungeons unfortunately.

This has all been from the perspective of a holy paladin, so other healing specs might find they have different experiences.  I have not gotten the chance to level my druid or priest, so I’m going from this one view.  What has been your experiences with healing of any class?

11 thoughts on “The State of Healing”