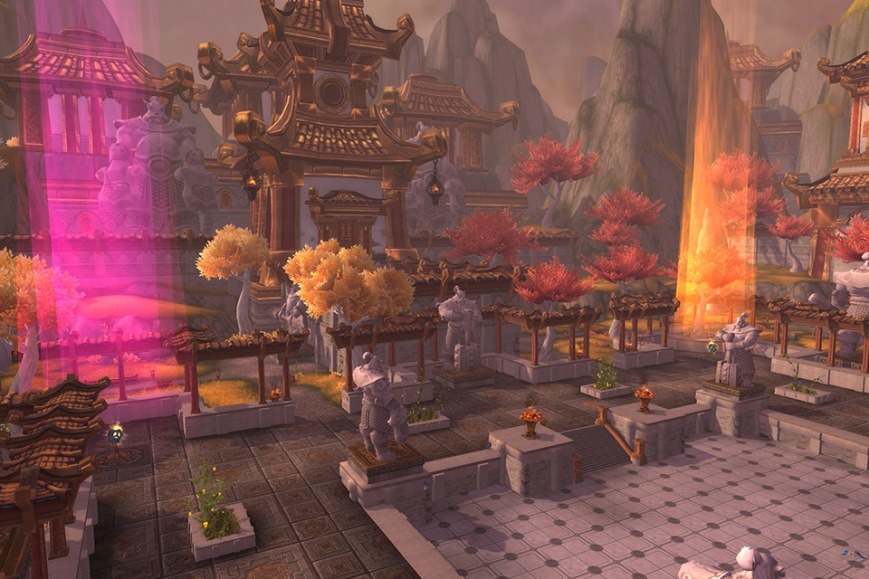 A couple of days ago, Fussypants and I played the PvP brawl Temple of Hotmogu.  I have played this PvP battleground the day before and had a great time, and even got some achievements!  Sadly when we played together she got quite frustrated as the opposing team was very coordinated and was excellent at focusing firing her down.  Totally did not help that she was the only healer on our team either!  Afterwards, Pants was more than happy to move on to a different PvP battleground for the next go, just not the PvP Brawl.  We also had a guildie friend along who had no clue what they were as he told us he simply never PvPs.

So here we are, joining a battleground, muddling along fighting the bad guys.  Our mini team was 2 tanks and a healer, an unusual trio for battlegrounds.  Of course the first Battleground we get is the Temple of Kotmogu  but this time, we did a lot better.  While the team overall was not as coordinated as Fussypants, the other tank, and I were, the experience was a lot smoother.  And it certainly helped that Pants and I used voice communication with each other – we were in the same room!  We focused on picking up the orbs and holding onto them, particularly in the courtyard.   Pants made sure that she healed herself and me when needed, and I went after a few of the problem players on the other side to try to keep them focused on me rather than her.  There was on vengeance demon hunter I particularly disliked – I loved taking him down.

We both had a lot of fun and we won the Battleground!

Legion has made a lot of changes to PvP.  Frankly, I think overall for the better.  One big example for me is separating out talents that work just in PvP and talents that work just PvE.  The “leveling up” of the PvP talents as opposed to PvE talents makes it more interesting in my mind.  They added value to the play.  It is no longer just a grind.  Game play is always better when meaningful choices are available.  While there is not a lot of choices initially in PvP leveling up, they do appear later in the process.  You have a decision once you meet max level by getting to choose between different PvP options within a grouping of 3.  Of course, everyone is familiar with this from the talents from the PvE side.  Once you move far enough in level you have some interesting options to choose, they can really affect your game play.

Additionally, they evened the playing field for all the types and specs.  By tuning the damage, mitigation, and healing of all the different abilities, they gave everyone a better chance of survival and completing objectives.  Gear no longer determines your success rate, how well you play does.

The PvP aspect of the game now is even more interesting to me than it was in recent expansions.  When I first started playing WoW, I played exclusively on PvP server.  I transferred to a PvE server in order to play with Fussypants.  Now as I learn from the upcoming expansion news, Battle for Azeroth, it will not matter which server, I can PvP just about anywhere.  That makes me excited!  I might even go Horde again!

This blog post was written entirely by Yotaan. Thanks Dad ❤