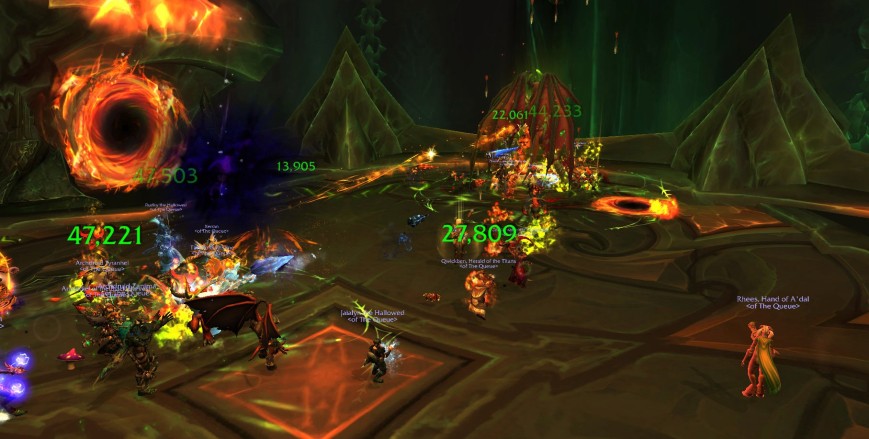 Today was the day! With rosy cheeks and bright eyes, the raid teams of <of The Queue> descended upon Antorus the Burning Throne in a quest to save all of Azeroth (and also get some sweet, sweet loots). After a two hour raid night tonight, my team got through seven of the eleven bosses in normal difficulty, meaning that I’ve now seen a good chunk of the instance. Despite my lack of sleep (life has gotten very busy!), I absorbed a lot of information during those two hours of pulls!

The biggest thing I noticed right off the bat was that Blizzard definitely learned their lesson from Tomb; the first couple bosses of Antorus were much more in-line with the expected difficulty level. It wasn’t until Kin’garoth that my group wiped, and even there we only got stuck for a couple of pulls.

I will admit that my raid team is overgeared for this difficulty but this only goes to prove that, unlike Tomb, Antorus encounters can be outgeared. That was definitely a problem in Tomb – no matter how good your gear was, mechanics still had to be executed perfectly to avoid some sort of raid wipe mechanic. While I don’t think better gear should allow a group to totally roflstomp a zone, gear should definitely make an encounter easier and smooth over any minor mistakes. Antorus has done a much better job of balancing these two forces.

Partly due to my own bleary exhaustion and partly due to the fact that we tore through them so quickly, I honestly don’t remember a lot of the details from most of the bosses. The general impression that I got though, was definitely a raid with a lot of movement. As a holy paladin who’s built herself around Light of the Martyr instant casts, I was totally digging it! But, I can see more stationary classes not enjoying that as much. 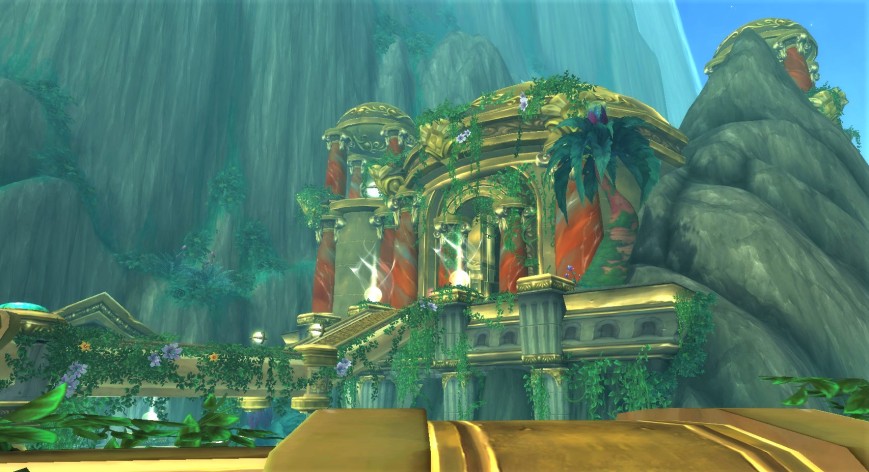 One fight that did stick out to me though, was the Eonar fight. First of all, the room was absolutely gorgeous. Titan glowing technology everywhere mixed with plants and green, it was truly a beautiful room! Unfortunately, the fight itself felt… weird. There was a lot of running around to fight different groups of adds (presumably to stop them from attacking Eonar’s spirit or somesuch like that) and then, very suddenly, an achievement flashes up and we win. No boss, no final adds wave (that I could tell), just finish off this pack and we’re all done here. I suspect that this fight will be a lot more involved in Heroic because in Normal, it definitely felt very “LFR Desolate Host, but there’s actually no Desolate Host”. I honestly spent more time enjoying the scenery and tracking down the group than I did executing mechanics, and everyone’s health was totally fine.

Later on was Kin’garoth, who, as I’ve previously touched on, was definitely a step up from everything preceding him. Dubbed the Soup Boss by a sleep-deprived Pants, Kin’garoth featured not only a beam of death, but also balls of raid-wide AoE, an immunity phase, and two large adds which needed to be burned down as fast as possible. It definitely took us a pull or two to figure out that we needed to focus down the purple construct first as well as how to effectively avoid his almost instant kill zap. Once we got those two things down though, we were all set.

I did notice that there was a little big of awkward mechanics overlap (throwback to Fallen Avatar), but unlike the bosses in Tomb of Sargeras, we could actively control which mechanics overlapped by prioritizing a different add over another. I like that a lot; it gives teams the ability to tailor the fights to the mechanics they can better counter, making for a more engaging experience.

We got one quick pull in on Varimathras before the two hours was up, wiping at about 50% health and lots of mechanics still to work out (I’m looking at you, Misery), but I’m pretty confident that the team will be able to get him down at our second raid night of the week. Unfortunately, due to a metric ton of conflicts, I won’t be able to attend that raid so I’ve got a week to wait before I can jump back in. That just gives me plenty of time to get all excited again, right?

All in all, I’m super stoked for the new raid! Raiding is, by far, my favorite aspect of the game, and as much as I like having familiar fights down to a science, I also really love experiencing new ones! I have good feelings about my raid team’s progression in this tier, and I can’t wait to unlock that final cut scene for the first time (I always try to avoid spoiling it until I can see it myself). Bring on the Burning Throne!