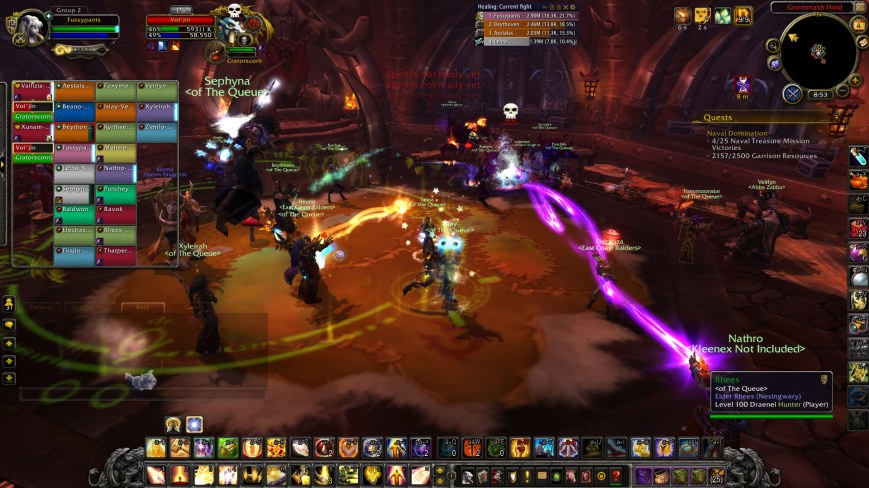 Many moons ago, I lucked into a group and got my For The Alliance achievement.  However, this was back in the days before the <oTQ> guild, before CRZ was a thing, before even Vol’jin sat on the throne in Orgrimmar. Since it happened so long ago, I figured now was the perfect time for a redux!

For two Fridays in a row, I have had the honor of leading two complete attacks on the Horde  capital cities.  The nights started out with me assembling all the guildies who wanted to come.  While everyone got situated and started heading to the meeting ground, I recruited more folks from the server’s trade chat to finish filling up the group.

Both nights, Orgrimmar was our first stop.  The grand fortress cities of the orcs was difficult for two reasons.  The first and most obvious reason was that it was the most populated out of all the horde cities.  Speed was our only ally- we had to fly in and fly out as quick as we could.  Luckily, the horde-side of my server is rather empty so we never faced too much resistance.  Most of the brave defenders of Vol’jin died as soon as they flagged themselves for PvP, so strong was the power of our AoEs.

The other tricky part about Orgrimmar is that it is the only horde capital city where CRZ is not enabled.  This meant we were limited to the people we could recruit from our own realm.  But really, with a guild of 1000+, we ended up being fine.  Each night we attacked the horde city with a force of about 30 folks and were able to easily crush the Warchief.

Back to the story! As soon as I finished up gathering a force, we all met atop a secluded mountain near the great city.  I briefed the plan to them: Fly as one, head straight to the throne room, and start pew-pewing on Vol’jin as soon as you could.  Once the troll was down, do not engage the enemy in a pitched battle- get out of there as quickly as possible.   With a great roar, we were off!

The flight into Orgrimmar was probably one of the smoothest of all the cities.  We flew in as one, entered the throne, and began our attack.  Vol’jin spammed his annoying mass hex ability but before long, the Warchief was dead! Our exit strategy differed on the two nights; the first night we took a portal away and the second night we jumped on mounts and flew out.  Either way, we were in and out quickly- we were professionals!

After Orgrimmar, I was able to fill up the group the rest of the way via the group finder and our force almost doubled in size.  We would meet up in a pre-determined spot, explain the battle plan, and attack!  It did get a little hectic here and there, as most 40 player groups do, but we stuck together for the most part and were able to down all the horde leaders both nights!

One of the highlights of the night though was definitely the antics of Yotaan.  You see, Yotaan is a horde player at heart.  He might be alliance right now, but his allegiance is still with the red and black.  I purposefully did not inform him of my plans to attack the horde cities but I could not hide this secret for very long.  The first night he tried to distract me from my computer screen (to the amusement of my guild listening in on mumble) and the second night he stepped it up a notch and logged in game.

Unfortunately for Yotaan, the horde-side is pretty dead.  Yotaan bravely attempted to raise a force to repel our attack but a grand total of zero people actually came to his aid.  When his fellow hordies failed him, Yotaan has no choice but to take matters into his own hands. He followed us to each capital city, attempting to pick off people in the group (mainly me) with cries of “For the Horde!”.  Again unfortunately for him, he never lasted very long.  It’s the thought that counts, right?

The other nice thing about the horde attacks was the praise and positivity I got from the non-guildie people on my realm.  I had wanted to run this to get the achievement for the folks in my guild- I hadn’t even thought of what the other folks on my realm would think.  Needless to say, I was shocked and flattered when I got whispers from others on the realm thanking me for leading and even asking me to join the guild.  That was both unexpected and very heartening.  Server community isn’t dead at all!

But most importantly, we were victorious! Over the course of two Fridays worth of runs, we got somewhere from twenty to forty people their shiny achievement and bear mount to match. It was the perfect expansion lull adventure and I had so much fun taking part in it.

One thought on “For the Alliance Redux!”