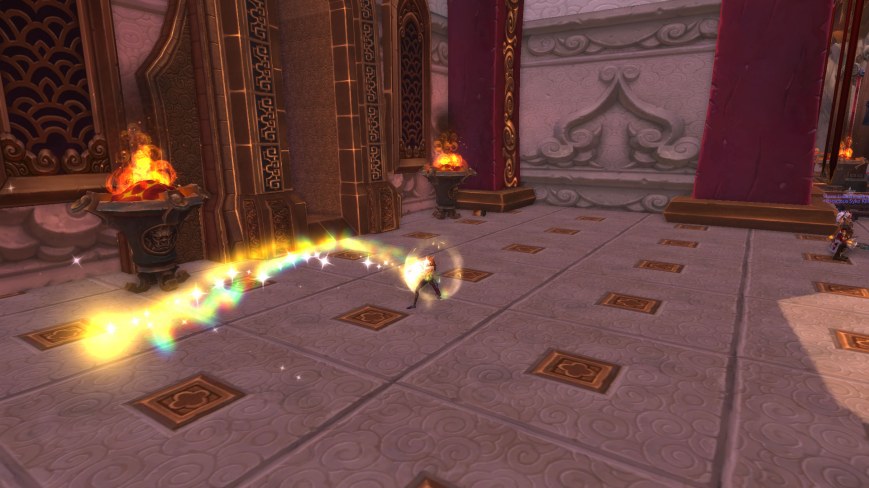 Ok, this is a pretty boss screenshot

So, I’ve gone and done it again!  I have fallen in love with another type of healing that will be invalidated come Warlords of Draenor.  This time though, it’s a different healing class.

Discipline priests to be exact.  I decided to make the switch from holy to disc, and right away dove straight into healing LFRs.  I had some vague idea of spamming Smite, but other than that I was walking in blind.

I spent the first LFR frantically trying to switch between Atonement healing and normal healing.  Needless to say, I was a far last place in the healing meter, and was very disheartened.  But I rolled up my sleeves, and queued up for another.

This time, there was another disc priest in the raid, who obviously knew what they were doing.  I sent them a quick tell, asking how to disc priest properly.  They responded with “Spam Smite”.  I responded back, “lol”, but it turns out that they were serious.  This LFR, I tried to do as the other disc priest, and only spammed Smite, Penance, and Power Word: Solace.

And it made worlds of difference.  I was able to put out quite good dps (better than my similarly geared feral druid), and moved all the way up to second in healing.  When you just stick with one type of healing instead of attempting to juggle the two, disc’s numbers get much bigger and more consistent.

I have now been disc healing for about a week now (I know I am nowhere near pro at it) and I’ve really come to like it.  At my lower ilvl, I put out pretty good healing numbers, and a respectable amount of dps.

At low ilvls that is.  As I did more and more raids, I ran into a few heroic geared disc priests.  The heals they put out were formidable (but not crazy), but the damage, oh dang.  The few disc priests I healed with were eight or higher on the dps, pumping out above 100k. 100k.  That is crazy high.

And then there is the mana component.  I didn’t ever go oom- in fact, I didn’t even need to think about my mana at all!  The mana cost of my dps spell are so low that I could effectively spam them all day long.  And, these spells cost far less than the equivalent healing spells.  It was a win win situation, and probably too much of one.

So, I can see why Blizzard decided to nerf this ability. I wish they hadn’t nerfed it so hard, but I can totally see why they did so.  Atonement was far too powerful for its own good.  Even still, I will miss it.  Yes, it will become far less effective after the nerfs, and I expect than it’s popularity will decline.

Atonement appeals to me not because of the overpowered-ness (though that does help), but more the creative way of healing.  At this point, I have had experience with four different healing specs, and Atonement was one of the most unique.  I love the hybrid feeling of doing dps to heal (part of why I love Selfless Healer).  It requires a dps mindset,  mixed with a healers awareness, which is something I actually excel at.

And Atonement healing is fun.  There’s no other way to put it.  I love seeing those green numbers mixed in with the yellow ones.  I love that my Penance can heal anyone if I direct it at a mob, or do a big heal on a single ally.  I like the fact that I can be almost competitive with my dps, and that I don’t really have to worry too much about healing.  My dps will handle it.

So, it seems I’ve fallen in love with healing again.  I’ve been playing my healers far more than my dps classes, and am really enjoying it again.  My question to you is should I try Mistweaving or Restoration next?

4 thoughts on “Atone for Atonement”